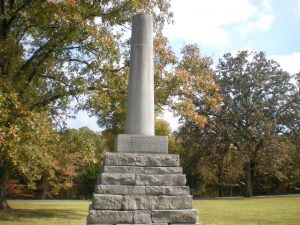 Back in the early 2000s, when I first started to seriously delve into my family genealogy, I was quite eager to see where my research might lead.  Contrast that with my husband Tim who was not at all interested in finding his “dead relatives,” even though he is a real history nut.  Cattle rustlers?  Nah!  Descendant of kings or queens or presidents?  Who cares!  Regardless of Tim’s disregard, in I plunged.

Using Ancestry, I started tracing backwards following my mother-in-law’s family write-ups, finding the documentation to support it.  Aha!  I found one tree with the same family as ours: William Thomas Mayberry and wife Jane Caroline Griner.  (I just now looked and there are 2,624 trees for this family, yikes.)  I had found 8-yr-old Jane in the 1850 census, living with her family, but her father Robert’s last name was spelled Grinder, whereas our family spelled it Griner.  I contacted the member with the matching tree and she immediately replied with the following story: 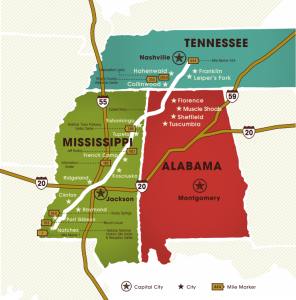 Yes, they later spelled it Griner but it was originally Grinder.  Jane’s father, Robert Jr had been born in June 1809 and his parents, Robert Sr and wife Priscilla, owned Grinder’s Stand, on the Natchez Trace near Hohenwald, Tennessee.  These stands offered food and shelter to travelers along the Trace, which was a trail running between Nashville TN and Natchez MS.

On Oct 10, 1809 while Robert Sr was away for supplies, his wife Priscilla was tending the homestead and the stand with her almost 4-mo-old son Robert Jr and her older children.  She welcomed a traveler who was accompanied by 2 other men, a U.S. Indian agent and his servant.   Later that night, Priscilla heard two gunshots ring out but was too frightened to investigate.  By morning, Meriwether Lewis had died of those gunshot wounds.  The agent who had accompanied Lewis buried him a few hundred yards from Grinder’s Stand.

When Priscilla’s husband Robert returned from his supply trip, he was arrested and charged with Lewis’s murder.  A trial found him not guilty due to lack of evidence and the prevailing historical record states that Lewis’s death was ruled a suicide.

A few years after I discovered this story, I was on a plane from Seattle to Nashville for a (different) family reunion.  I struck up a conversation with the woman seated next to me who revealed that her maiden name was Lewis and was a direct descendant of one of Meriwether Lewis’s brothers.  Meriwether himself never married nor had any children. I tentatively asked her what her family thought had happened at Grinder’s Stand.  She replied that they were convinced he had been killed by the U.S. Indian agent.  (Whew! But wait, what??)

And, since discovering this story, my ho-hum husband has been much more interested in my findings. So, see, you just never know! 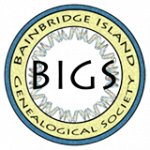